How to Fix a Smelly Carpet 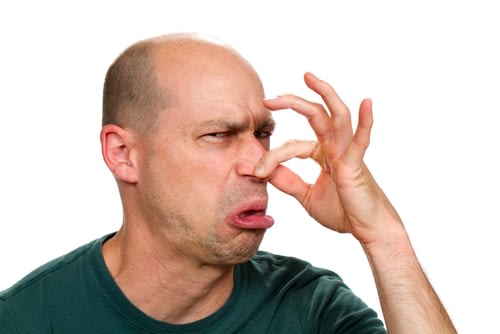 Does your house smell like a locker room or dirty sweat socks? Whether your whole house has smelly carpet or just a room or two, the odor can be overwhelming. Common carpet odors range from cat urine and smoke odors to mildew and that oh-so-pungent sweaty sock smell. Steam cleaning the carpets oftentimes makes the smell worse, especially if the water isn’t properly extracted during the process. In fact, your carpet may not have been overly smelly until after a water mishap.

Wet carpets are generally smelly carpets. If you think about it, all the dirt, debris, spills, and pet accidents soak deep into your carpet, often seeping down into the pad. Even if you mopped up the spill and regularly vacuum your carpet, the carpet pad gets nasty. Then, when you have a plumbing accident or rent a steam cleaner, your carpet becomes soggy. All that debris mixes with water and nature do its work, hastening the decomposition process which is a smelly process! Add in the potential for mold and mildew growth and it’s no wonder your carpet stinks.

Steps for fixing a smelly carpet range from home remedies such as sprinkling baking soda on the carpet to professional treatments. How you approach the job depends on the extent of the odor as well as its cause.

If you’ve lived in the house for some time, you may be accustomed to its smells and less likely to notice them whereas a visitor will immediately notice a foul smell. You would likely suspect that a smoke odor is a likely present if you allow smoking in the home. Likewise, if your home has indoor pets, your carpet may have pet odors. If you’re unsure, ask a trusted friend to help you identify the odor. A fresh nose knows!

For general carpet odors and refreshing, ordinary baking soda does wonders. Arm & Hammer recommends “a sprinkle a day.” First test for colorfastness and then sprinkle baking soda on your carpets, allowing it to sit for about 15 minutes before vacuuming as normal. Anecdotal reports from users indicate that while baking soda has helped with odors, some users suspect that baking soda adversely affected their vacuum cleaners.

If you’re not comfortable using ordinary baking soda, you can try commercial products developed specifically for deodorizing carpets and upholstery such as Arm & Hammer’s carpet and room deodorizers or a Febreeze product. Many of these products are designed to “neutralize” odors rather than cover them up. Neutralizing the odor is preferable to simply spraying an air freshener as once the air freshener dissipates, the odor returns.

Many commercial carpet deodorizers are formulated to conquer specific odors such as pet odors or smoke. Likewise, many home remedies circulate the Internet targeting specific carpet odors such as using solutions containing ingredients as varied as vinegar, Listerine, or hydrogen peroxide. The problem with home remedies is color fastness. For example, you wouldn’t pour bleach on your carpets, would you? Then why would you spray peroxide on them?

As previously mentioned, soggy carpets are smelly carpets. Whenever a water accident occurs, extracting the water immediately is crucial! The longer the water sits, the more smelly it will become. Use a water extraction type vacuum cleaner and extract as much water as possible or hire a water extraction company to do the job for you and then use fans to circulate air and further facilitate drying. For minor plumbing overflows, once the carpet is dry, the odor will likely become less noticeable. However, it may return the next time the carpet gets wet.

Depending on the extent of the water damage, you may need to pull the carpet to expose the pad. You may even have to replace the pad! Obviously, the more difficult deodorization tasks such as a waterlogged carpet pad require professional help. Professional water extraction companies typically have access to more powerful deodorizers than those sold directly to consumers.

While hiring a pro to fix your smelly carpets may be more expensive than a box of baking soda or a can of carpet deodorizer, the results are worth it! If you can salvage your carpets and save yourself the cost of re-carpeting your home, hiring a pro for a professional deodorizing is money well spent.